Goldstar reports on initial prospecting at its Anctil property in Québec, Canada

Montréal, Québec – December 22, 2020 – Goldstar Minerals Inc. (“Goldstar” or the “Corporation”) (TSX-V: GDM) is pleased to announce that it has received assay results from the recently completed prospecting and mapping program on its Anctil property in the Chibougamau area of Québec.

The prospecting campaign on Anctil covered a target area of approximately 5 square kilometres and 144 samples were sent for analytical determination of Gold. Fifteen (15) outcrop samples returned anomalous values up to 128 ppb Au (0.13 g/t Au) as shown in the following table:

Most of these anomalous samples were gathered several hundred metres south of an altered tonalite intrusion intersected by historical drilling. The prospecting campaign outlined a new target area of approximately 1 kilometre long by 0.8 kilometre wide south of Anctil Lake. This target area, where almost no drilling was performed in the past, is open both to the west and the east, and additional prospecting would be needed to confirm its extent. 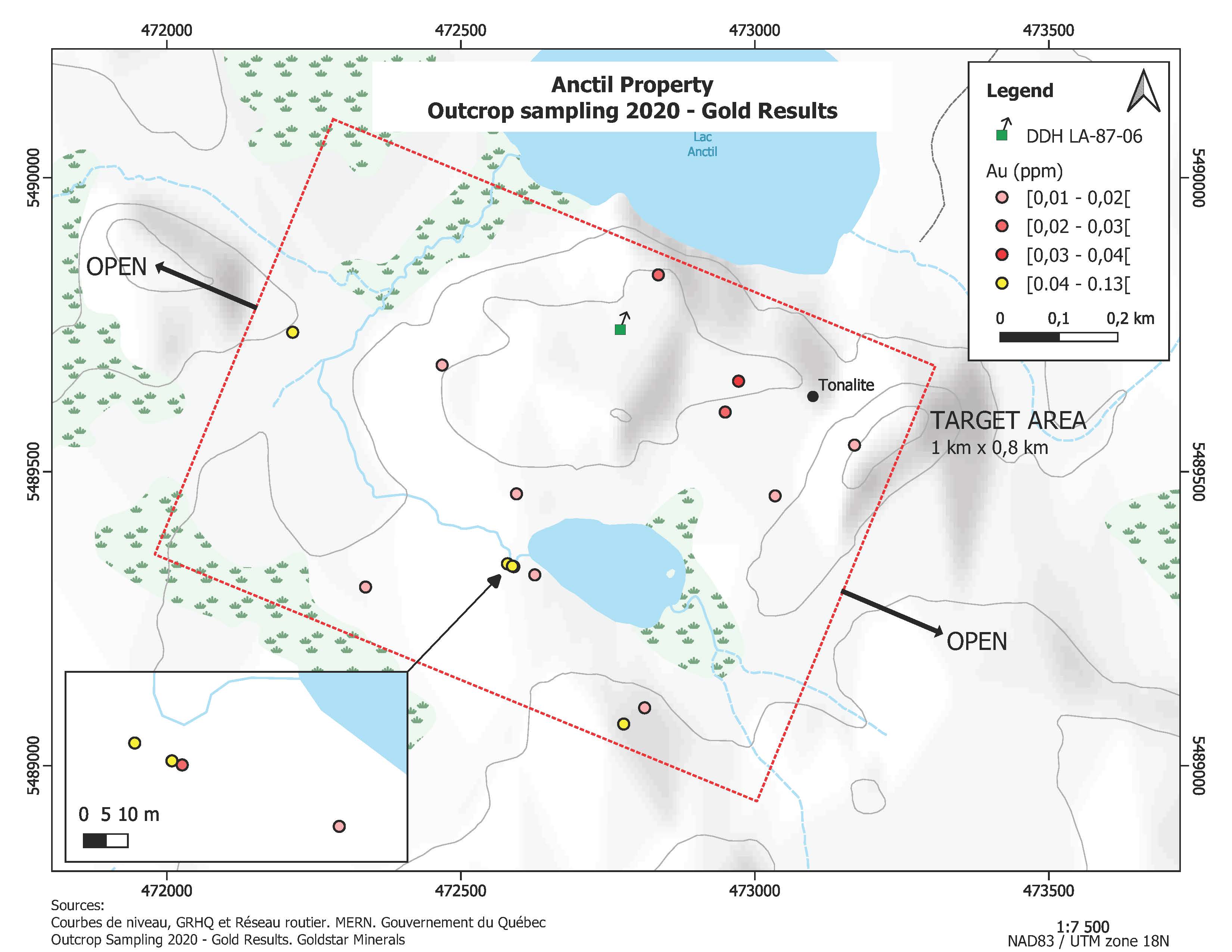 Historical drilling done in 1987 by Argentex Resource Exploration Corp., returned in hole LA-87-6 values of up to 3.5 g/t Au over 0.9 m between 101.6 and 102.5 m and up to 36.1 g/t Au over 0.9 m from 127.9 to 128.8 m in the surrounding host rocks consisting of mafic and felsic volcanic rocks, less than 25 metres away from the altered tonalite and host rocks contact. The hole LA-87-6 is reported to have a total length of 134 m and is believed to have tested the northern edge of the new target area that extends a few hundred metres to the south.

The Corporation cautions that these gold values are historical in nature and, thus, not NI 43-101 compliant. In addition, these values may not be representative of the mineralization that may be present on the property.

The Corporation is awaiting the compilation of assay results from the detailed prospecting campaign on the Nemenjiche property. Goldstar is also awaiting results from a VTEM airborne survey covering approximately 550 line kilometers over both Anctil and Nemenjiche for a total of 1,100 line kilometers. VTEM is a useful and high-accuracy technology for mapping lateral and vertical variations in resistivity, and to identify sulphide bearing units.

David Crevier, CEO states “Our current round of field work has established a target zone 1.0 km by 0.8 km that has had very limited historical drilling. However, this limited drilling does include hole LA-87-6 which has the highest grade intercepts documented in this area. Previous exploration had focused on areas to the north, west and east of hole 87-6 while our prospecting points to the target area to the south and which is open to the east and west. Once we combine the results from the geophysics with this new understanding of the target area, we will be able to define our drill targets for the upcoming drilling campaign.”

The technical information contained in this news release has been reviewed and approved by Benoit Moreau, P.Eng., a consultant of the Corporation. Mr. Moreau is a qualified person as defined by National Instrument 43-101, Standards of Disclosure for Mineral Projects.

Neither TSX Venture Exchange nor its Regulation Services Provider (as that term is defined in the policies of the TSX Venture Exchange) accepts responsibility for the adequacy or accuracy of this release. This news release may contain forward-looking statements. These statements are based on current expectations and assumptions that are subject to risks and uncertainties. Actual results could differ materially because of factors discussed in the management discussion and analysis section of our interim and most recent annual financial statement or other reports and filings with the TSX Venture Exchange and applicable Canadian securities regulations. We do not assume any obligation to update any forward-looking statements, except as required by applicable laws.