Montréal, Québec – November 30th, 2017 – Goldstar Minerals Inc. (“Goldstar” or the “Company”) (TSX-V: GDM) is pleased to announce that it has received the results of additional outcrop sampling from the WLF Zone at its Lake George Property, located in New Brunswick, Canada.

The WLF zone was initially identified during field work last Fall 2016. All 16 samples from the zone are characterized by mineralization associated with strongly altered metasediments, containing finely disseminated sulfides in a sericitized and hematized matrix. Assays are summarized in the following table.

Sampling of the zone has been systematic and based on available outcrop as constrained by topography. No visible mineralization was evident and all outcrops present in the zone were individually sampled by collecting random chip samples.

Zone continues to be open in all directions and now established at 100m x 25m.

The above samples were taken from an area 100m by 25m. The 100m axis is north/south and is interpreted to be the strike of the mineralization. The dip is interpreted to be 35-40 degrees to the east. Thickness has not been determined as work has been limited to outcropping material. The zone remains open in all directions as prospecting has been limited by thicker overburden, accessibility or other physical constraints.

The following map illustrates our findings at the WLF zone: 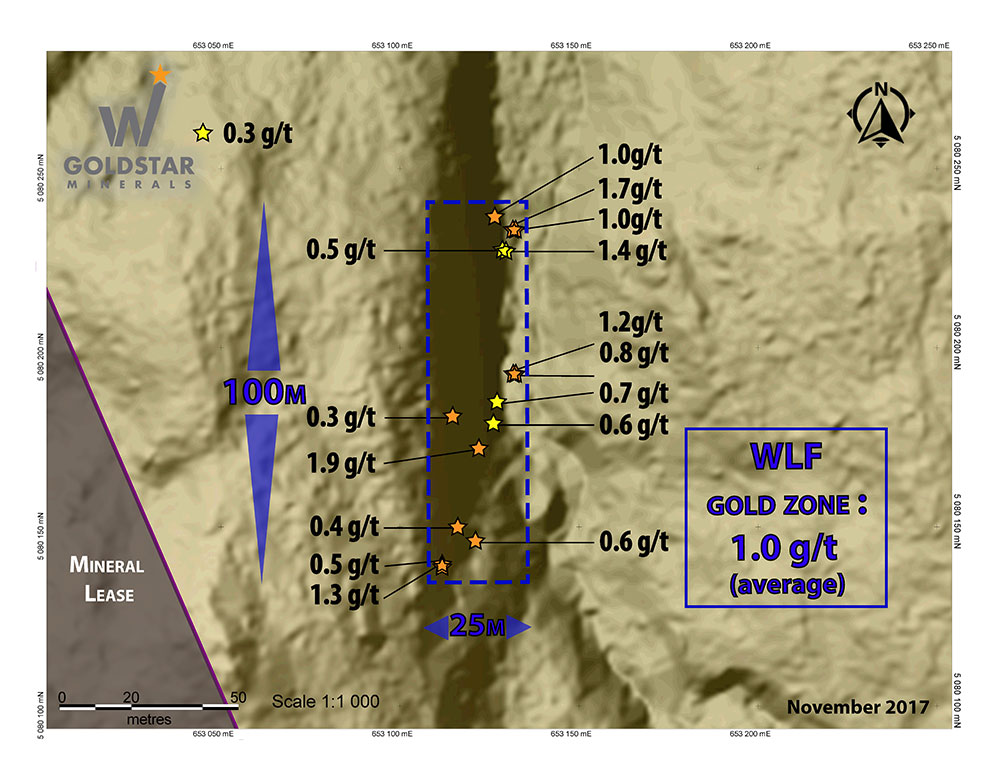 Late prospecting efforts in the final days of the current field campaign identified strongly altered metasediments approximately 400m south of the WLF zone. These will be sampled systematically during the next campaign and could expand the WLF zone.

The geology team is presently completing the compilation of the exploration data and will update the website in the coming weeks. Additional assay results from trenching will be available in the next few weeks and will wrap up the 2017 prospecting and trenching program.

Benoit Moreau, President and CEO of Goldstar comments: “This is a very exciting moment for Goldstar. We have established a significant zone averaging 1.0 g/t Au at surface. While in the early stage of the project, this is promising for identifying a large-scale bulk tonnage open pit target. We were initially attracted to the Lake George area for its large systems of kilometric scale located close to infrastructure. We have now scratched the surface of these large systems, found zones with mineralization, and are beginning to get a better understanding of where to look for additional mineralization. We still don’t know how this part of the system relates to the 1.0 g/t Au mineralization of a similar nature that we have found 1.6 km away to the west in trench LG-T-27 that was announced earlier this month, and the potential is both very intriguing and enticing. We are looking forward to drilling these targets to investigate how the mineralization behaves vertically and laterally.”

Assays were performed at AGAT Laboratories located in Mississauga, Ontario using conventional Au fire assay. These are outcrop samples that are not necessarily representative of the mineralization hosted on the property. Four (4) standards were inserted every 100 metres for QC/QA procedures. No duplicates or blanks were inserted.

The technical information contained in this news release has been reviewed and approved by Benoit Moreau, P.Eng., CEO and director of the company. Mr. Moreau is a qualified person as defined by National Instrument 43-101, Standards of Disclosure for Mineral Projects.

This news release may contain forward-looking statements. These statements are based on current expectations and assumptions that are subject to risks and uncertainties. Actual results could differ materially because of factors discussed in the management discussion and analysis section of our interim and most recent annual financial statement or other reports and filings with the TSX Venture Exchange and applicable Canadian securities regulations. We do not assume any obligation to update any forward-looking statements, except as required by applicable laws.